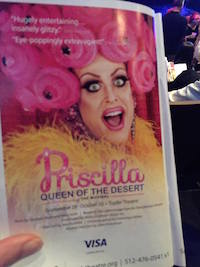 Last month, a group of us went to see Priscilla, Queen of the Desert: The Musical at ZACH Theater. We had a great time and appreciated that the theater was fully accessible. It got us thinking- what makes for a good experience at a movie, show, or concert as a person with a disability? Here are some of the things that came up:

Laura (LP): How was accessibility at ZACH Theater? Was there anything that needed improvement?

Nicole (NC): I am not a person that uses a wheelchair. However, my boyfriend does, and that makes me super aware of space when going to theaters or restaurants. I felt ZACH did a good job of keeping the lobby clear for wheelchair users. There were tables and chairs set up for patrons to sit and have drinks and there was room on each side of the tables for a wheelchair user to roll past.

Renee (RL): As a person in a wheelchair, I find the Zach Scott theater to be very accessible. However, there are only 4 wheelchair spaces available, 2 on the east and 2 in the west areas. Ordinarily, this works fine, however, if a group of people with disabilities were to attend with more than 4 people in wheelchairs, this could be a problem for the theater to accommodate.

The restroom is a disabled person’s dream. It is very accessible, as are the faucets and hand towel dispensers. I found the lowered water fountain for wheelchair access has very little water coming out of it; I had to stand up to drink from the higher water fountain, which has a good flow.

I also found accessible parking to be a problem. Within the circular parking lot, there are 2, maybe 3 spots. When those spaces are taken, the theater accommodates by allowing patrons to park along the sidewalk or on the side. The problem with this is when you have a van with a deployable ramp, you risk getting hit by a car. I also noticed the valet parked a car in front of a ramp. I informed the valet who then said they were told it was ok because there’s another ramp than can be used.

LP: Have you had negative experiences at other theaters? What do you wish theater managers or other theater patrons knew about access?

NC: I personally have not, but I have witnessed my boyfriend’s discomfort, which of course makes me uncomfortable. There have been inaccessible theaters where they have placed him in front of all the seating and essentially on stage. Other times the space for wheelchair seating has been so tight that a second wheelchair user wouldn’t have fit.

RL: I do find that in smaller theaters, such as one of the smaller theaters at Zach Scott, a person in a wheelchair has no choice but sit up front, practically onstage. This makes for an uncomfortable experience, for me, because I’m often worried the actors will back into me or trip over me.

Recently, I was at the Emma Barrientos Mexican American Cultural Center for a play, and the theater managers had trouble finding a ‘good spot’ to put me. If they put me here, I would block the actors' entrance; if they put me there, I would block something else. Eventually, I was placed near a prop, which had me worried, again, that an actor would trip over me. The manager then said he would just let the actors know to be careful in the area where I was. They did and there was no incident but when I go to see a play, I go for just that, to see a play – not be part of the play. I would recommend theaters have a ‘cut-out section’ that a wheelchair user could back into. 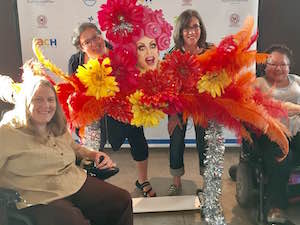 LP: Priscilla had a ton of extravagant costumes (above, with Jennifer, Nicole, Laura, and Renee) and dance numbers! Is there a way a blind person could enjoy this show?

LP: And what about deaf patrons – even if there were captions, could they still get the full experience without hearing the music?

RL: I believe so. Although this particular show did not have it, I’ve been to other shows, such as operas, that provide captions. Although I am not deaf (sometimes hard of hearing when my allergies are bad) I myself often appreciate the captions.

LP: The show we went to wasn't specifically "sensory friendly," but I've seen ones that are. What does that mean?

NC: If by sensory you mean no flashing lights for people with epilepsy or allowing talking for people like autism then I’ll have to say I’ve never been to a show like that but I’m sure it can be done.

LP: So it's the end of an amazing show (like Priscilla), time for the standing ovation. Is it rude to stand if you're sitting next to a wheelchair user?

NC: I would say yes. I hadn’t thought about it before but if you are sitting in front of a wheelchair user and know it or if you are sitting beside someone in a wheelchair you are blocking their view. Maybe there is even a different way to show a standing ovation so that everyone could be involved. Like handing out those small blow horns or some other musical instrument. That is something to think about for sure.

RL: No, I don’t think it’s rude at all. I have been with people/companions, who feel obligated to remain seated with me, however, I encourage them to stand up and enjoy the ovation, plus they can see and tell me what’s going on. I can usually tell when the main players come on stage by the loudness of the cheers. There have been a few times that patrons in front of a ‘wheelchair section’ realize they are blocking our view and will remain seated but then they can’t see. There have been many times that I just move over to the top of the stairs just to see but this could be dangerous. Plus, many patrons start exiting during the ovation and you have to move anyway to let them by. The solution I think, is to have the wheelchair accessible section on a small platform that would raise them a little higher than the row in front of them.


What are your thoughts about theater accessibility? What makes the theater accessible to you as a person with or without a disability? Tell us in the comments below!
Posted by Unknown at 2:31 PM