This was my second time attending a presentation of Opening Minds, Opening Doors, held at the Capital City Event Center. When I went last year, I had been on the board of directors for VSA Texas for only a month. VSA Texas sponsors events like this that feature art and people with disabilities. Their goal, in this case, is to combine storytelling and acting with public speaking so that the participants, or self-advocates, as they are commonly referred, can bring their stories to the general public. The disabilities include muscular dystrophy, multiple sclerosis, limb loss, cerebral palsy, autism, dyslexia, and epilepsy. 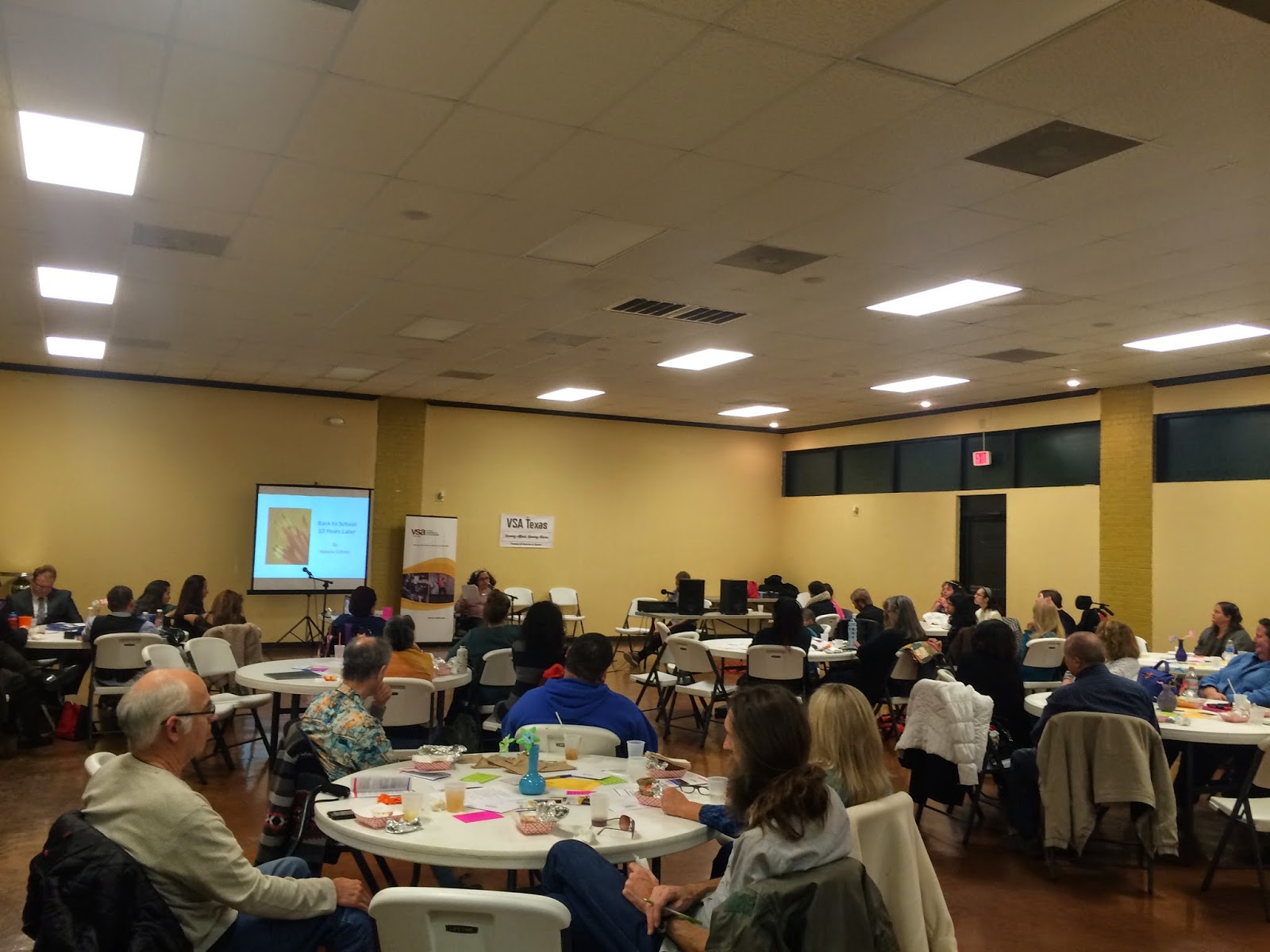 The purpose of this event is to give the public an opportunity to participate as an audience in the creative and insightful speaking abilities of the participants. The delegations came from Austin and El Paso. The El Paso group members are affiliated with the Youth Leadership Forum, sponsored by Volar Center for Independent Living. "Volar" means to fly. This event, which took place on February 5, allowed the participants' voices to soar. The late morning performance began at around 11:45 AM, with an introduction by Eric Clow and an explanation about OMOD.
The first speaker, Jamie Martinez, who hails from El Paso, began by telling a story entitled "Spring Break." This involved visiting her grandmother in San Diego. It was full of humor, especially the part about the dead cow they smelled, and eventually saw. The image was horribly funny, and it got Jamie and her grandmother giggling, picturing the cow's feet in the air and stinking to high heaven. That was the icebreaker for the event.
Next up was Alina Arredondo who talked about her grandfather, and all he had done for her while he was alive, and how he was continuing to inspire her from the great beyond. She recounted his influence in a story called, "To My Heart in Heaven." Viejillo was his name. He had encouraged her to excel in high school, (and later after he passed) go on to college, and she recently got accepted to law school. It was a story about faith and doing what was expected of the heart.
ROTC was the theme of the next speaker as he started off by barking, "Attention!" That got the audience's attention. Then, Paul Nathan told the story of how he entered ROTC as a freshman, but because of his disability could not participate fully. As circumstances would have it, he found a place for himself as a medic by attending to the injuries of the corps, acquiring a medic's certification, and earning respect from others. When graduation had become a viable cadet. He ended the speech by the order, "Dismissed!" Though we were not leaving, because it was far from over.
An ensemble of four--David Chapple, Renee Lopez, Kaye Love, and Eric Clow--took over from there with a piece called "Close Encounters of the Public Kind." This episode was largely a tongue-in-cheek account of how the public views people with disabilities. Though funny, this presentation carried some right-on observations by the disabled on stage.
Speaking about her bus trip to California in a piece called "Disneyland Here I Come," Roxela Confresi talked about her great adventure westward. Speaking with the aid of a Dynavox machine, she eloquently described her experiences which she couldn't have done without the loving support of her family.
"Cell Phones" was the topic presented by Stephanie Gonzalez in which she explored the irony of a device that was probably intended to make us more connected, but in many regards, has left us isolated in our own little worlds. She left the audience with the image of the people we love staring down at their cell phones oblivious to the world around them, and denying themselves of human affection.
Roxana Confresi, sister of Roxela, discussed returning to college in "Back to School 10 Years Later." It was another example of how people with disabilities can overcome obstacles of apprehension and new surroundings.
Another highlight was this guy named Chuy Duarte. Ironically enough, he talked to God a lot, and guess what Chuy means? It's a Spanish nickname for Jesus. He talked about miracles, and how in spite of what the doctor said, he was determined to walk again. He told the story about his first physical therapy session when the therapist told him he would never walk again, but he was determined to start walking right away. Which he did! He took 10 steps that first day through sheer willpower and by the grace of God. The story was very inspirational, and it brought me back to the idea that prayer, hope, and determination play a large part in our recovery.
The final presentation of the early afternoon was another ensemble consisting of five people--Ashley Butler, Kamand Alaghehband, Marielle Abrams, Danny Taylor, and Laurel Coppock. The premise for this final episode was that a fairy godmother was able to grant wishes to all the participants. They recounted their most far-out fantasies. 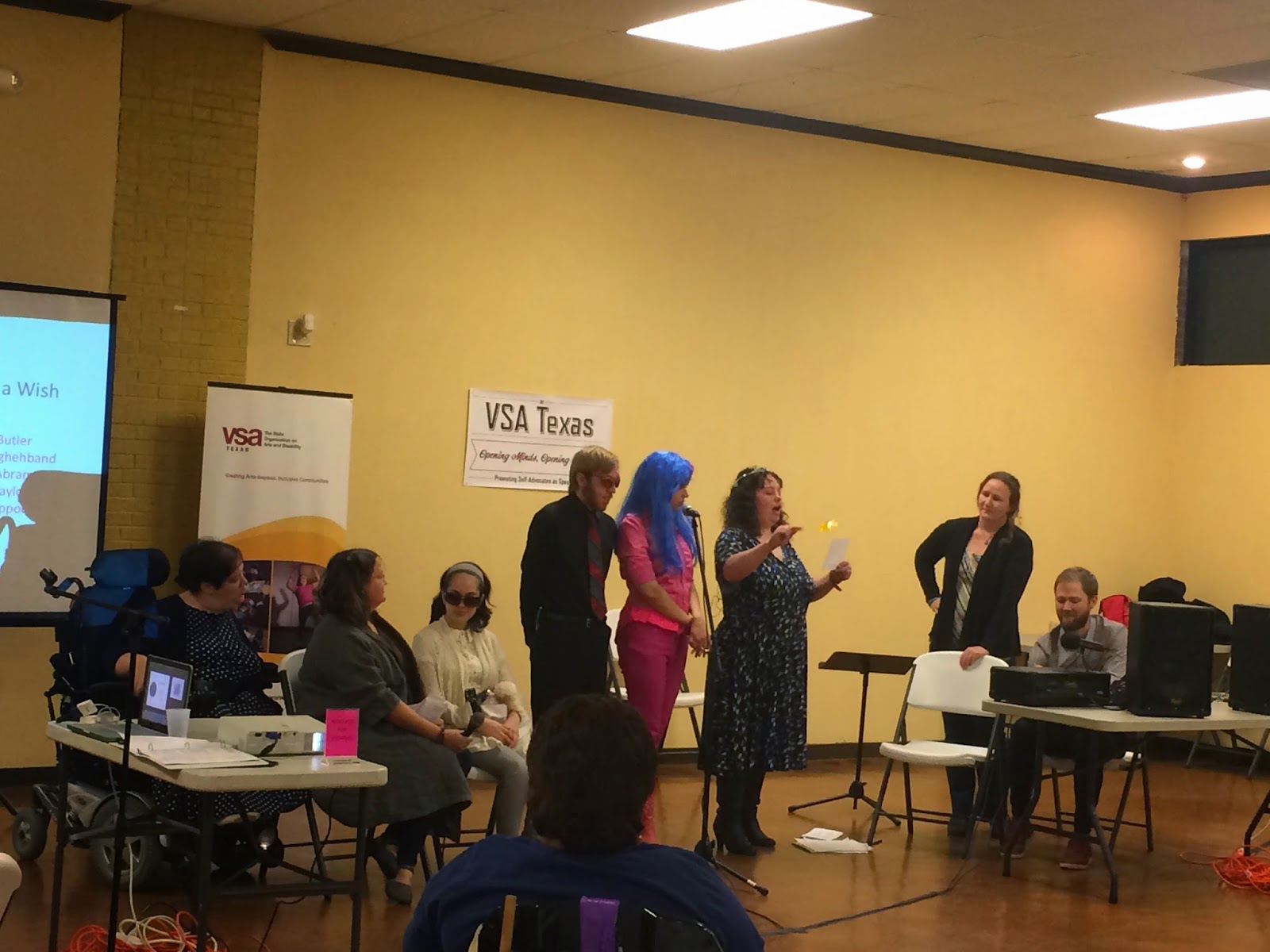 All in all, the event was all that it was cracked up to be - entertaining, inspiring, and relevant. Entertaining because it had humor that tickled the audience; inspiring because of the courage and resilience displayed in the stories; relevant because the stories reflected what was important in the lives of the storytellers. I look forward to the next Opening Minds, Opening Doors event, and I invite the readers of this blog to attend an event of theirs, support a worthy endeavor, and be entertained by an inspirational group of people. 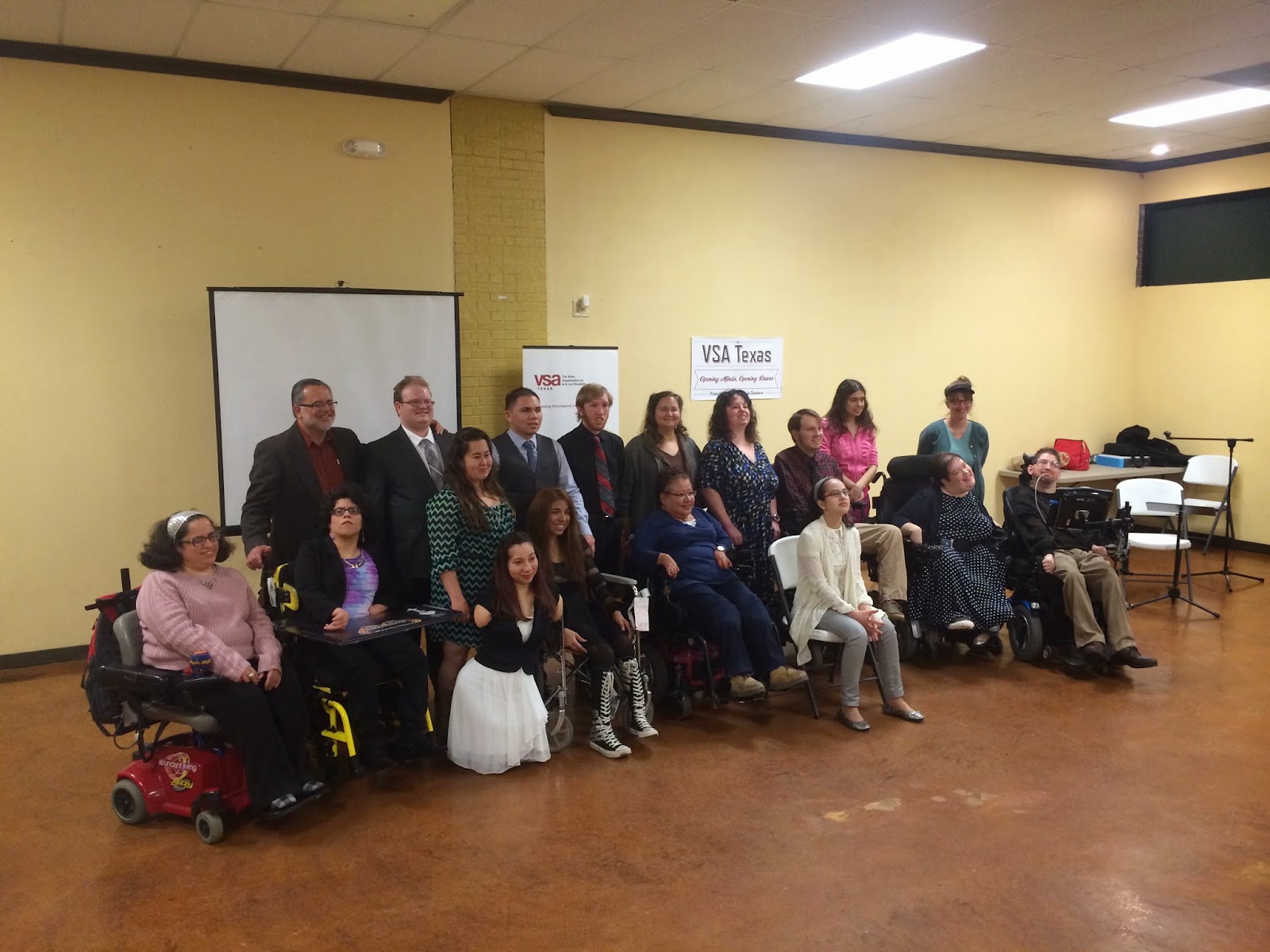